Our general rule of thumb on this trip was to find the cheapest possible accommodations in any given location that came with private bathrooms. That ruled out hostels and some of the most basic hotel options in European countries where hall bathrooms aren’t unusual, but it kept things pretty budget-friendly. In our three weeks of travel, though, we went in for two splurges: once the third of three nights in Paris, once the fourth of five nights in Italy. Little bookends of glamour for our trip. I am so happy with the effect this had on our travel. Starting and ending our adventure with those little touches of luxury left us with a general impression of luxury all across the board, even though some of the places where we stayed were rather plain (epecially the dorms in London!!).

Our third night in Paris we stayed on the fifth floor of Hotel Duquesne Eiffel, a choice we settled on after reading review after review of the shocking view out the windows on this street corner. Not only was the hotel just as sleek, shiny, and elegant as we could’ve imagined, the view was past our expectations, and we weren’t even in THE famous room. Right next door to it proved just as good, as you will see from our photos.

The goal for this day was relaxation and glamour, but we front-loaded the relaxation by accident, so tired from Sunday’s miles that we decided to sleep in rather than arriving at the Eiffel Tower at 8:00 to beat the crowds. This decision cost us our whole day, rather than “just a couple hours,” as we’d told ourselves, but we didn’t mind. We were standing right under the Eiffel Tower, after all, and we were even in the shade, and we were together, reading a book about Paris. No picnic happened, though, and no boat on the Seine, and no stroll across the river to wander around Trocadero. These were all possibilities on our itinerary, along with A Real French Restaurant Experience and a peek at what all the fuss was over Champs Elysees. In the end, the day included the Eiffel Tower, and by a burst of well-prepared Monday-in-August-in-Paris improvisation, a fabulous dinner followed by a night-lit stroll down Champs Elysees to the Arc de Triomphe. Good enough, I’d say.

This was the third day in a row of our travels in which we ended up unintentionally fasting (or practically fasting) for half a day. It was the introduction to a theme that has stayed with us most vividly from our travels and the conversations it inspired: a deeper understanding of “Give us this day our daily bread.” This, too, must wait for another time. For now this anecdote, just to prove that our trip wasn’t QUITE perfect: Waking about 9:00 a.m. and checking out of our hotel around 10:00, we thought we’d just see what there was to see near our new hotel by way of food, maybe grab a pastry on our way to the tower, maybe have a picnic before standing in line. By the time we were checked in, settled, and beginning to execute our day’s plan it was after noon. We looked for a nearby boulangerie or market but there wasn’t much. It seems we were in more of a business/governmental district, tucked in right beside L’Ecole Militaire and a block from UNESCO. By now desperately hungry and desperate to get to the tower before the crowds worsened, we ducked into a corner market, what seemed the French equivalent of a convenience store. We picked up a little wheel of Camembert, two peaches, and two apricots, and went on our way. We ate the mushy, grainy fruit but the cheese! Before Mike had finished peeling the wrapping away we could smell it. Not being the kind to shy away from stinky cheese, we thought nothing and bit in. We literally almost spat it out. Hoping and starving, I even took a second bite, a memory I won’t soon forget. We wrapped it up as tightly as we could and even then the smell stayed with us until we found a place to discard it several hours later. So we saw the tower and got back to our hotel at 6:30 to settle our dinner plans, change quickly, and get across town. Sitting down to dinner at 8:00 p.m., we ordered two bowls of French Onion Soup. Besides the fruit and that bite of cheese, the only thing we’d eaten in almost 24 hours. It was good.

We slept in till 9:00 this morning, which was perhaps a mistake, since it meant we wouldn’t beat crowds to the Eiffel Tower, so here we are, and it’s all we’ve done today besides relocate to our astonishingly lovely hotel here in 7th Arr. I’m sitting on the south edge waiting for Mike to descend from the top, after which we hope to find the hotel has successfully made us reservations for dinner. All we’ve eaten today are two peaches, two apricots, and an awful bite of a cheese we had to throw away – we bought it in what appeared the equivalent of a c-store. So we are fasting, and hoping to be gratified tonight after yesterday’s disappointment and today’s starvation.

I’m sitting on our balcony – practically a shrine to the Eiffel Tower for how large it looms in the foreground. To my right on the horizon, Sacre Coeur; almost in arm’s reach, Les Invalides; at my feet, L’Ecole Militaire. We marveled at how perfect a hotel we found! Last night we sat here together almost till 1:00 a.m. taking in the city and the tower’s lights, a bright half-moon on our left. We descended by stairs from the tower and walked home still with nothing to eat, discovering on our arrival at 6:30 p.m. that the concierge had been unsuccessful in securing our dinner reservation. Thank God I brought the indexes of Food Lover’s Guide to Paris! I cross-referenced, looking up online half a dozen options open both August & Monday (a rare find) and we had an 8:00 p.m. reservation by 7. We raced to iron and change, setting out for Chez Andre just off Champs Elysees. We emerged from the metro by Grand Palais. Our dinner was sublime, a mountaintop worthy of Paris. We ate for 89E, too, a feat! We were served by a warm and good-humored manager and a completely darling waitress. Famished, we made quick work of the bread basket and began a bottle of white wine, slightly sweet, so crisp and cold. We lingered over bowls of French onion soup, split a main dish of duck breast with caramelized peaches, slowly shared a cheese plate and a glass of port, and then finished with dessert, for Mike a rum-soaked baba, for me an exquisite and generous creme brulee, hard as a paper-thin sheet of glass on top. we walked up Champs-Elysees after two hours at the table, glimpsing the Arc de Triomphe before catching the metro back to our hotel. It was a perfect night.

There are a lot of pictures. Obviously. 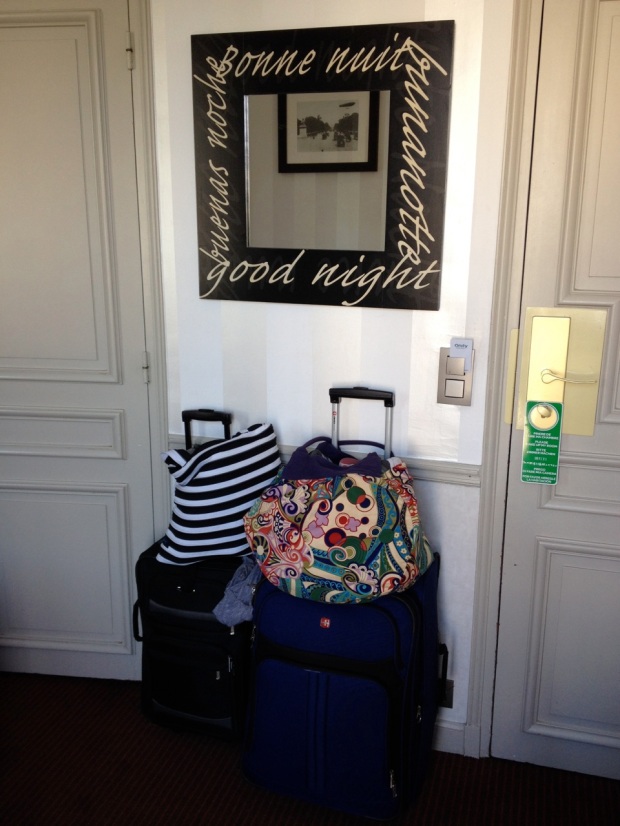 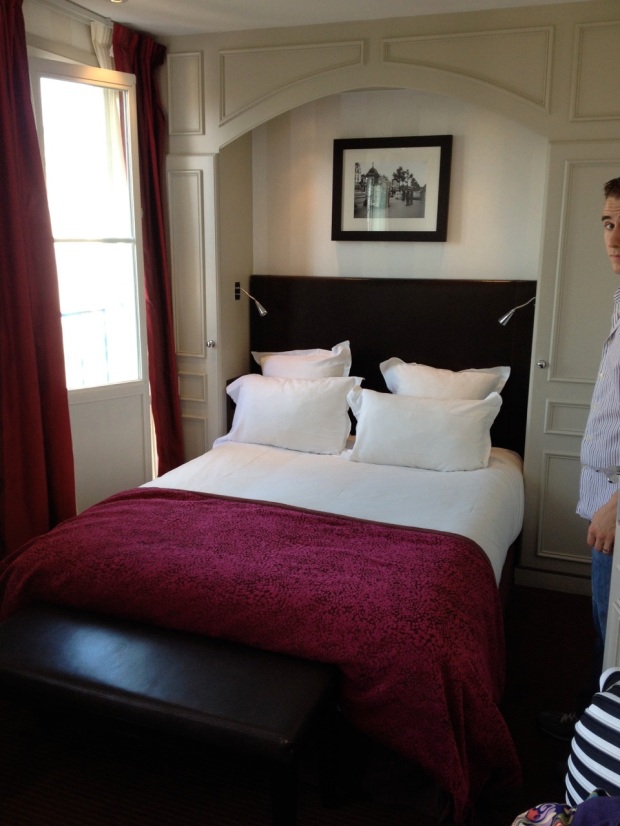 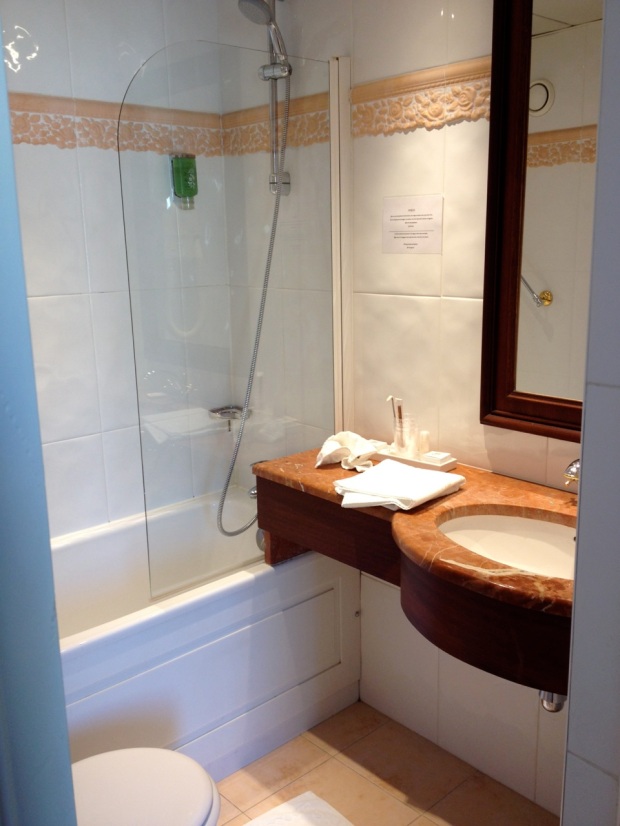 Not your average French hotel bathroom. Our room was large and lacked for no comfort. 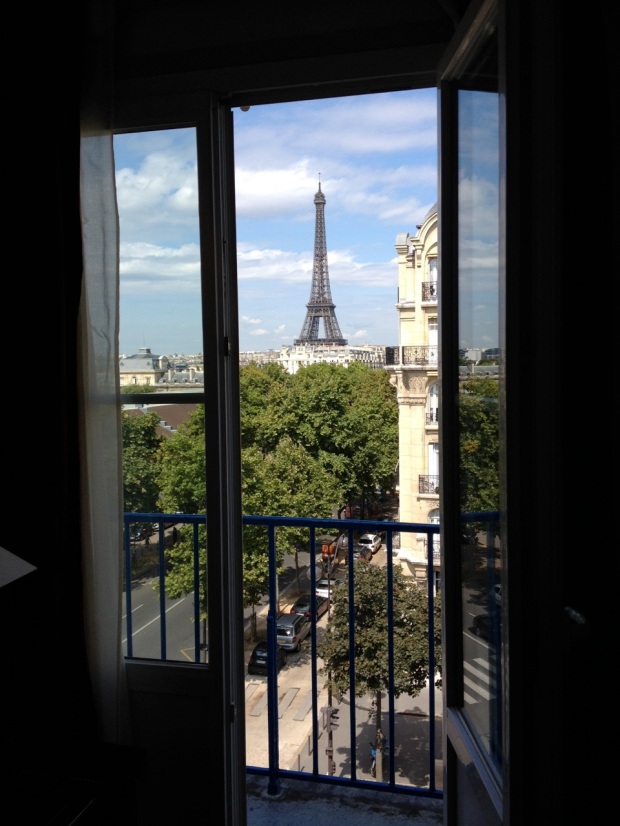 This is for real.

And this was our view. 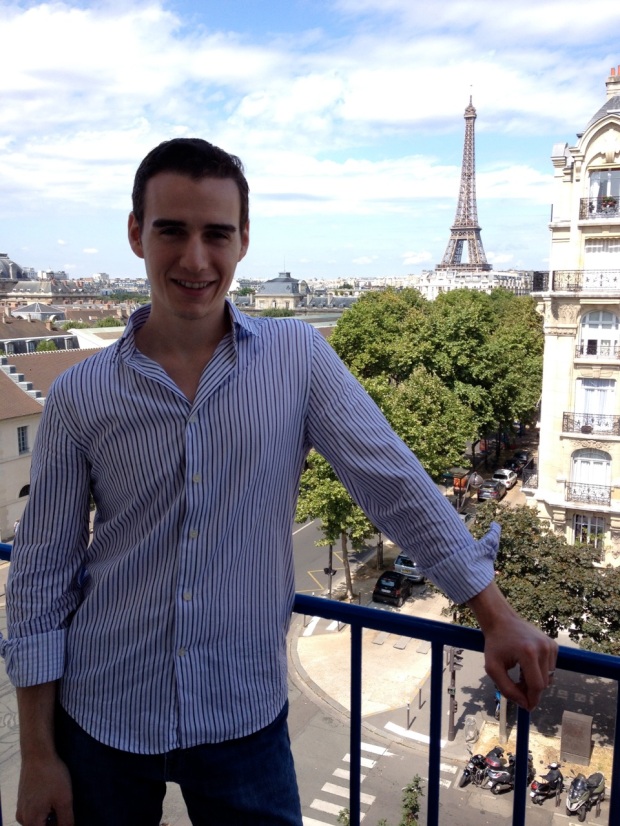 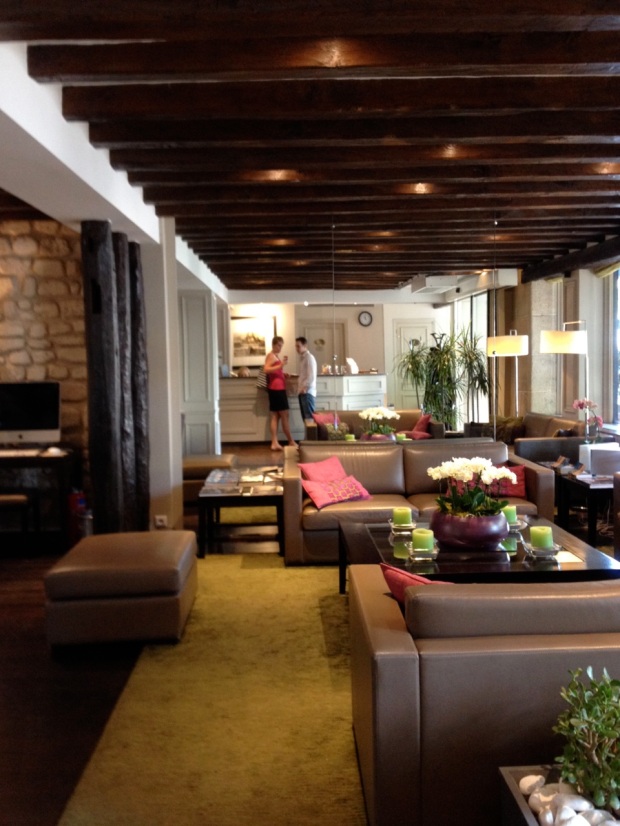 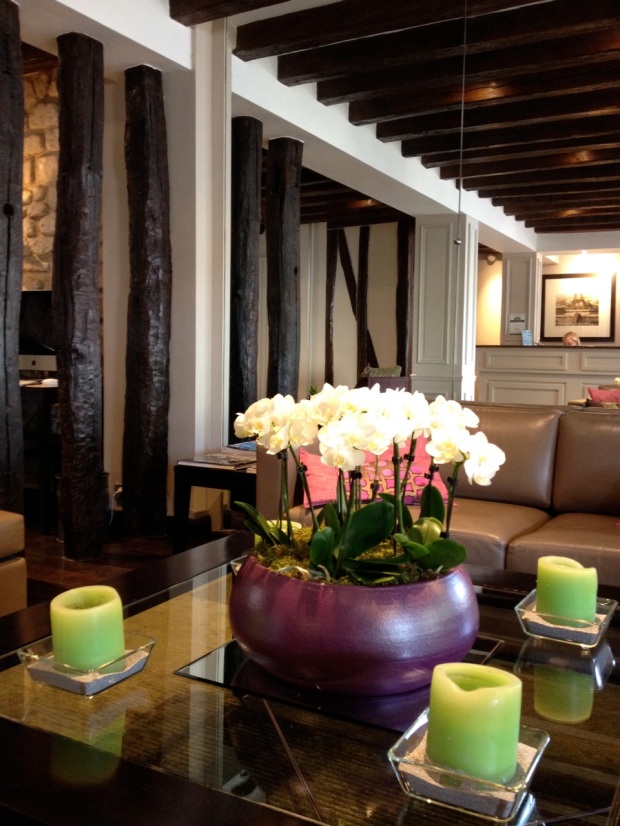 Everything about this hotel was perfect. 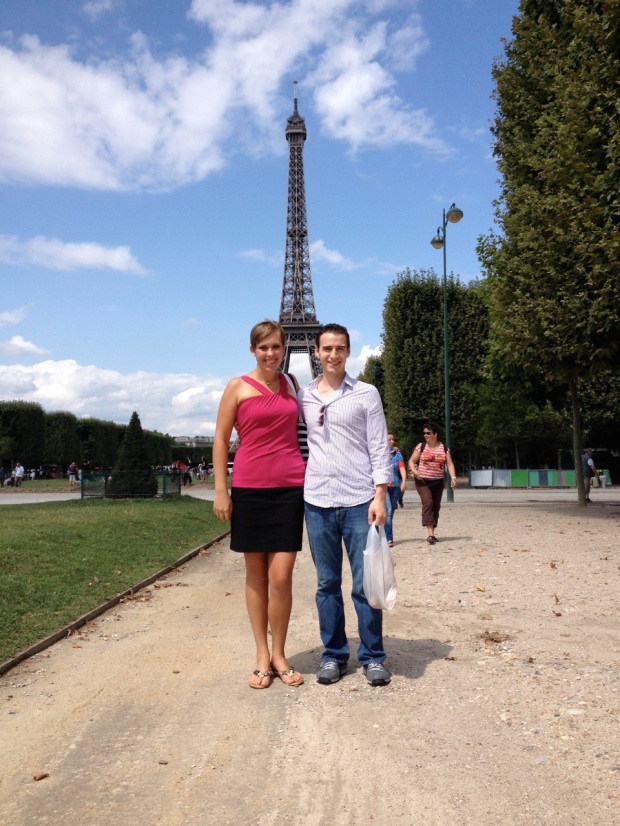 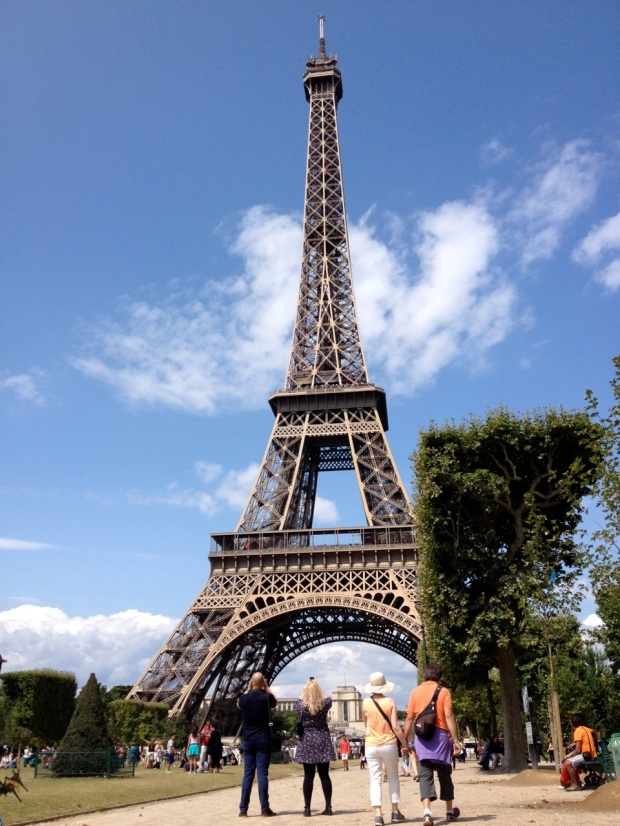 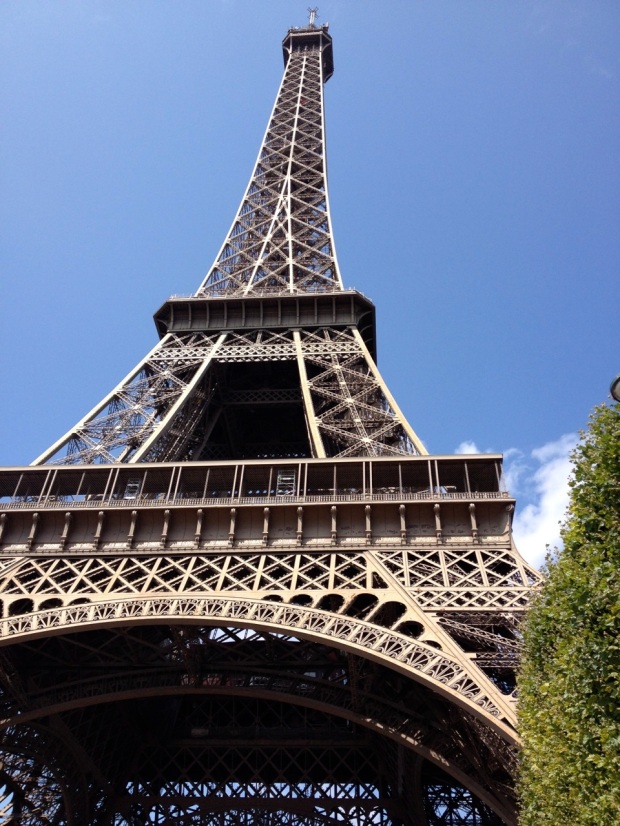 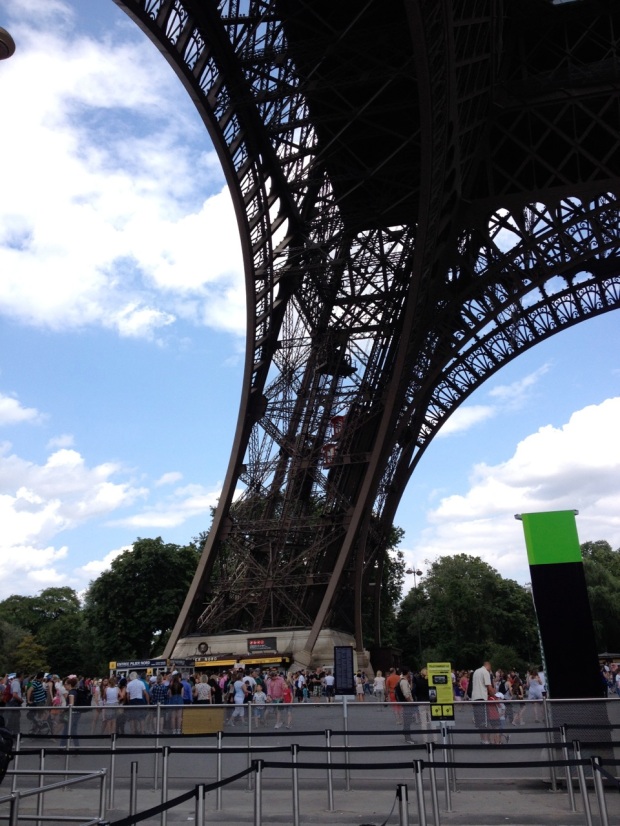 We stood in line under the tower for two or three hours just to get our elevator tickets, and then another hour at least waiting for our turn in the elevator, itself large enough to carry 25-30 people. If we had it to do over we would’ve climbed the stairs. We took them on the way down and they really weren’t that bad. We would’ve saved hours even if we’d stopped to rest after every few flights. 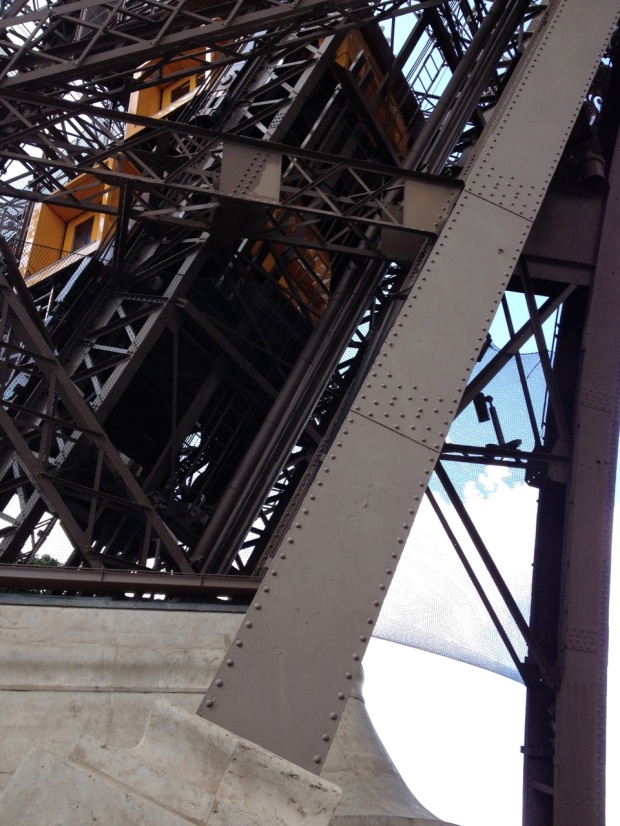 The elevator car (for this particular leg of the tower). 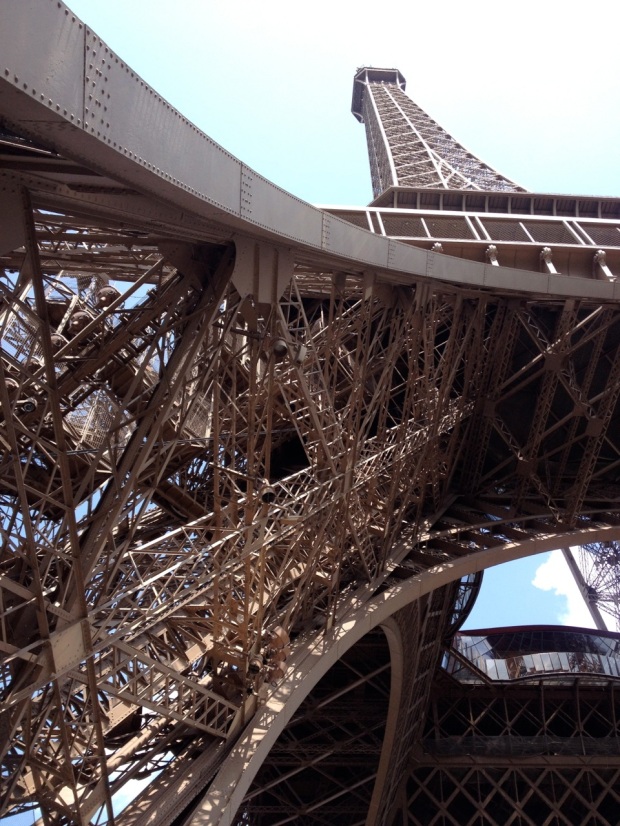 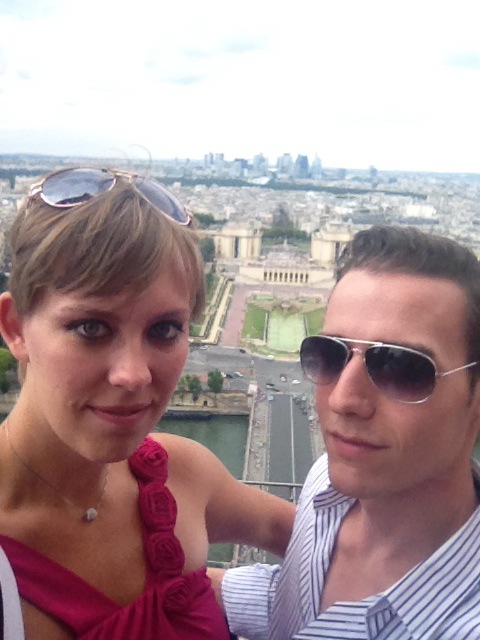 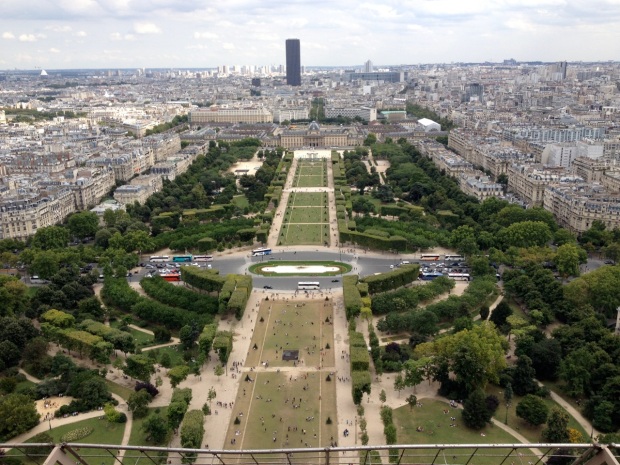 My view facing south, where I sat on the second level (about 1/3 of the way up the tower) waiting for Mike to ascend and descend the rest of the way. I was too chicken and didn’t want my nerves to spoil his fun. I had a great time studying the town with my map out and enjoying a relatively quiet corner away from crowds. 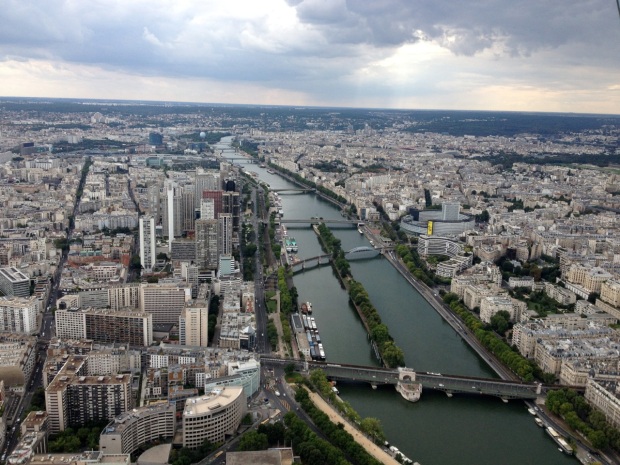 Mike’s photo from the top 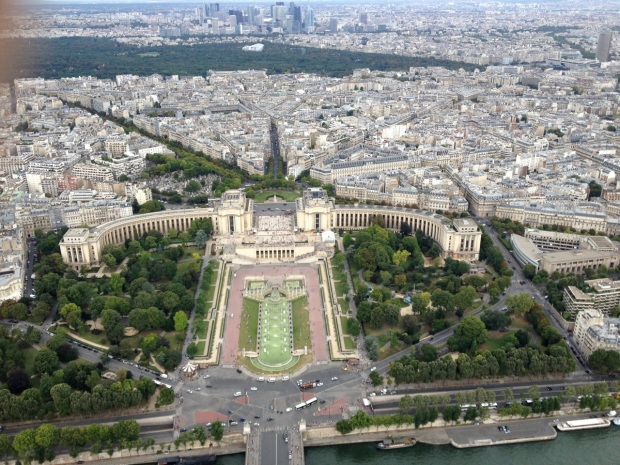 Notice the little flesh-tone in the upper left corner: Mike was holding my iPhone outside the safety grating of the tower, gripping it anxiously lest it plunge to its (and someone else’s) death. Pictured: Trocadero 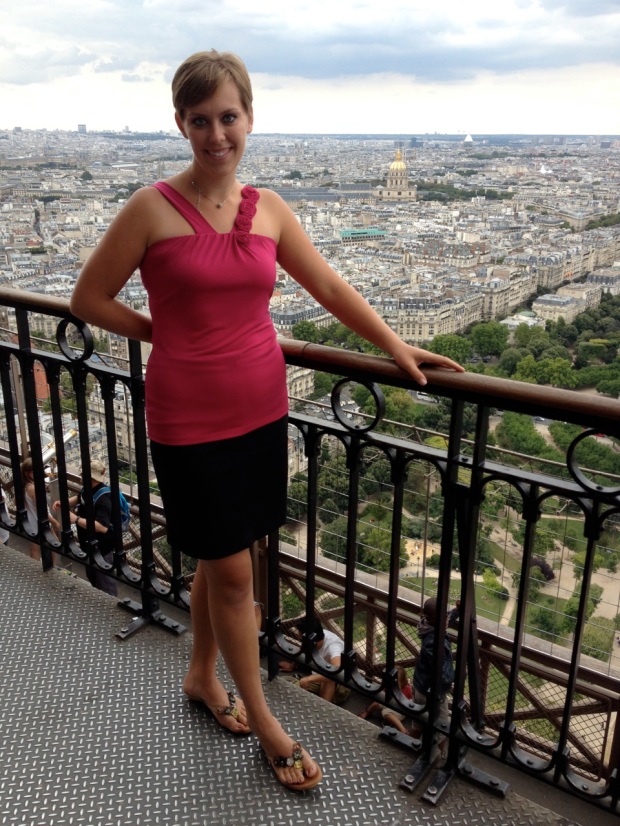 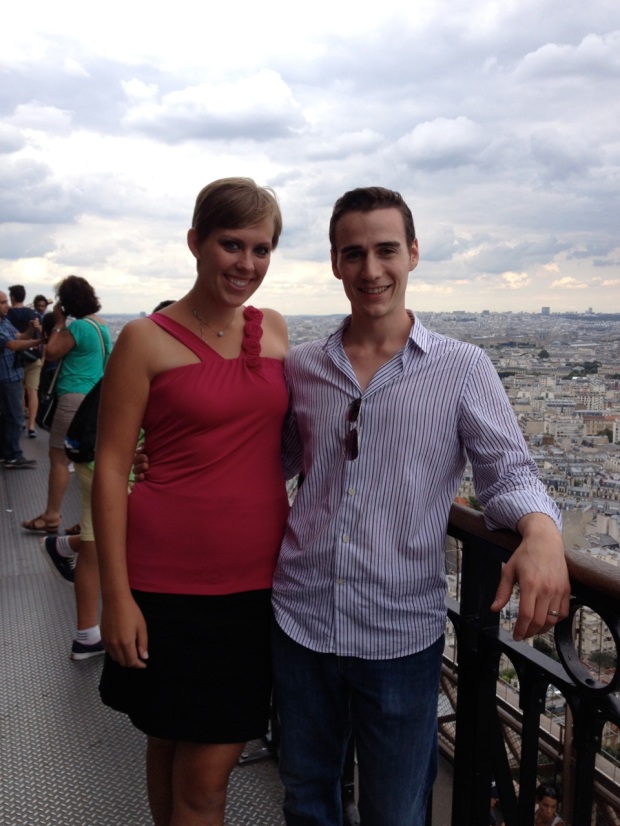 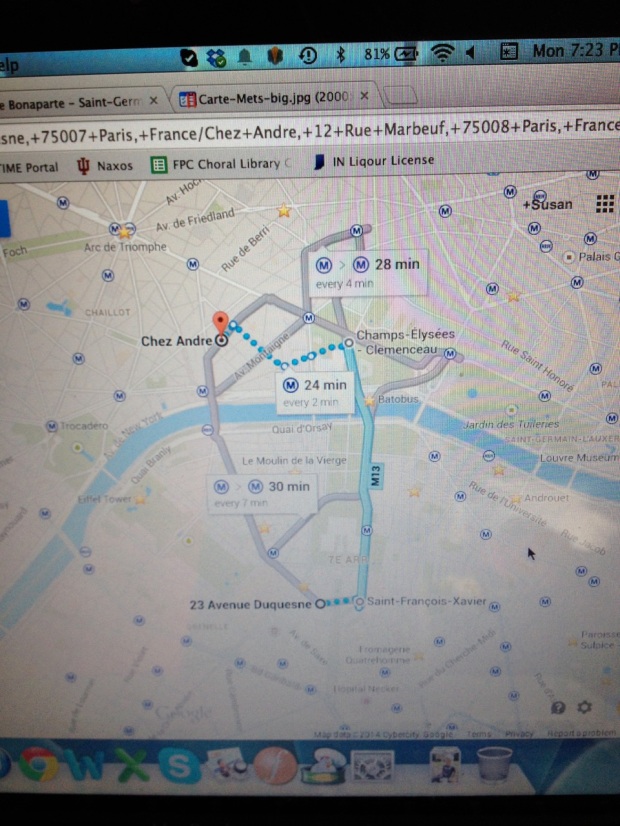 This is a picture of our computer screen, and a sample of our navigational system at its most sophisticated. Mostly we just used paper maps and addresses. Sometimes when we had a tight schedule or a complicated route and the good fortune of reliable WIFI in our hotel we’d do something like this. We felt like ninjas by the end. I highly recommend world travel without WIFI/cell data in your pocket. It’s a thrill… 😉 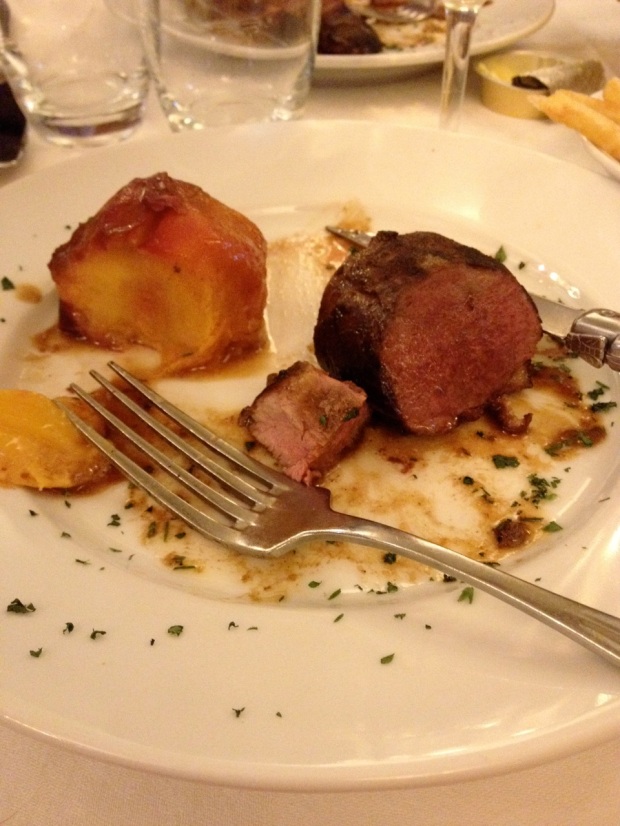 I was too hungry to think of photographing our sumptuous fare until halfway through. This entree was so generous that when they brought it out, split onto two plates, we thought they’d accidentally brought us two. It was marvelous – duck breast with caramelized peaches. 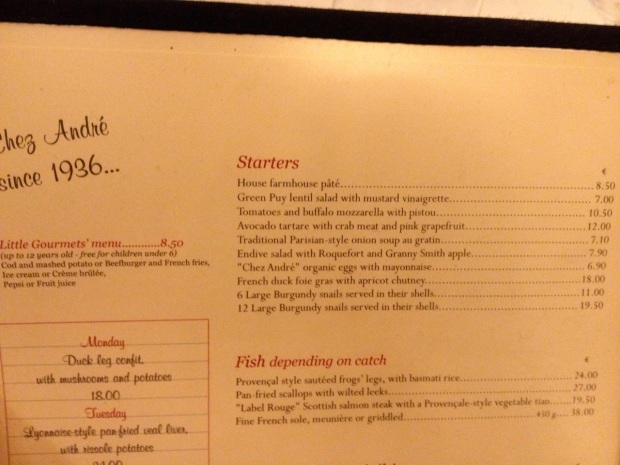 Pretend you don’t want to read this menu. 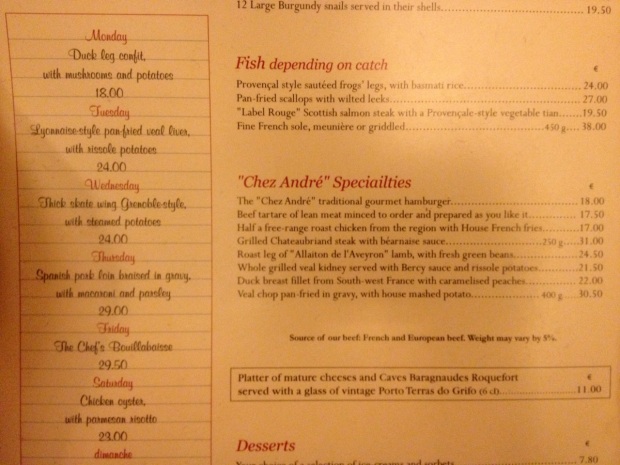 Chez Andre was a quarter mile off Champs Elysees. We were so thankful to be sitting in a lovely French restaurant against all the odds of the day and the season. Our spirits were so high. 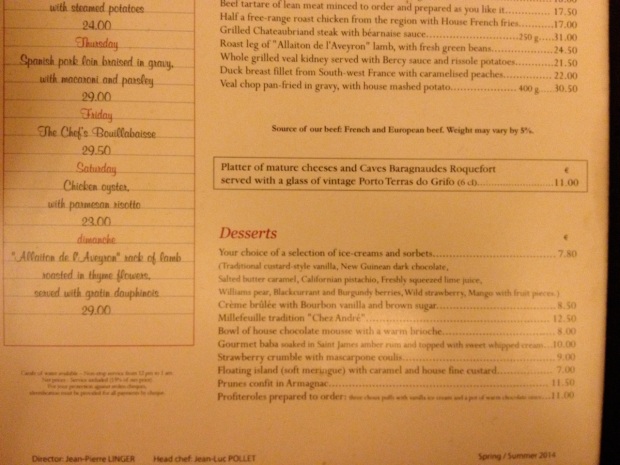 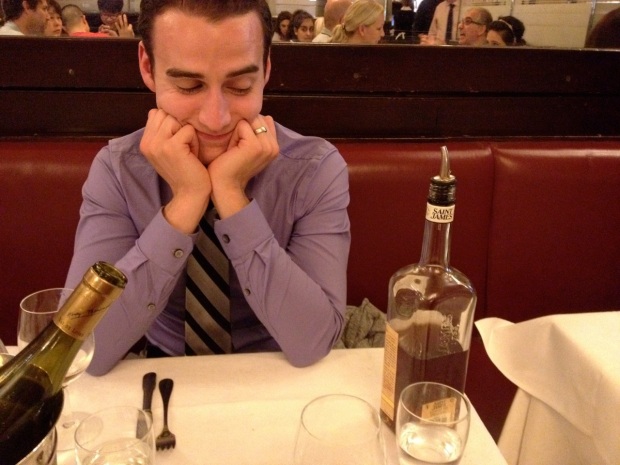 Mike ordered the rum-soaked baba for dessert and a few minutes before they brought out dessert they dropped off this bottle of rum on our table, where it sat for the remainder of the meal. The pictures tells the rest. 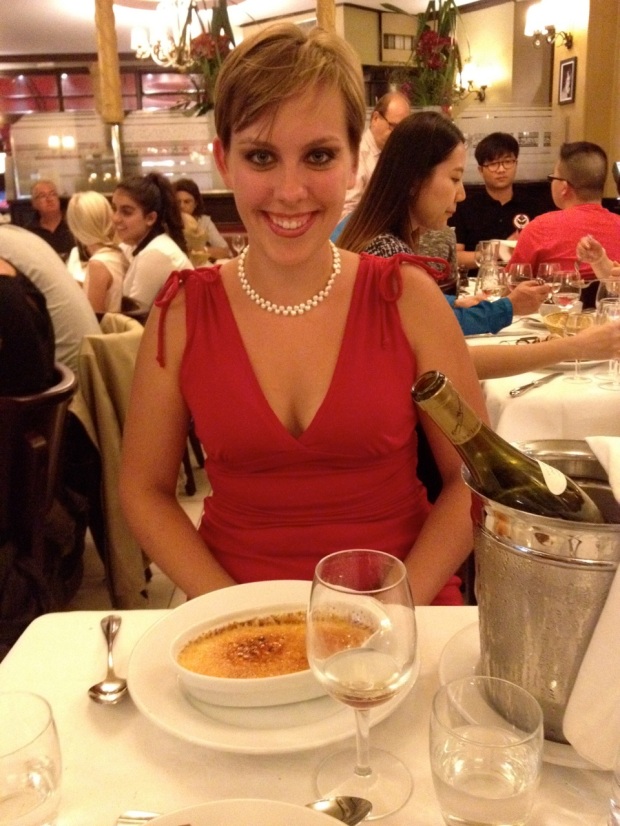 Funny story: some brash, loud guy was pestering a sophisticated middle-aged waitress as I was coming out of the ladies’ room on my way out to the street to meet Mike after we’d finished dinner. Having finished his conversation with the well-mannered waitress, he stormed away, pushing through a narrow space between himself and me fully aware by the look on his face that he realized he’d just made a lady wait instead of doing the gentlemanly thing (not to mention waiting his turn). I didn’t mind and met the waitress’s eye with a smile as I walked toward her. The look she gave me, in an instant, almost set me laughing out loud: all her French propriety and dignity was offended on my behalf and she spoke it all with a grin. Hilarious! 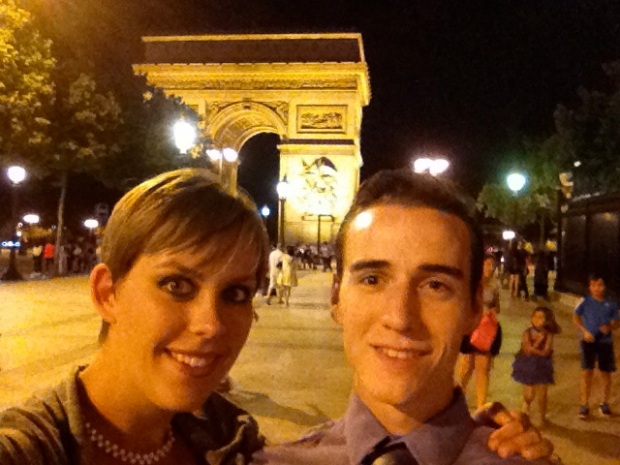 Champs Elysees is hard to describe, especially at night with all its sparkle. The Arc de Triomphe is at its end. It spans well over a mile, lined on both sides with the most extravagant shopping you can imagine, from indoor luxury car dealerships to the world’s largest Louis Vuitton store. Crazy.

Walking “home” through Paris at midnight was fun. 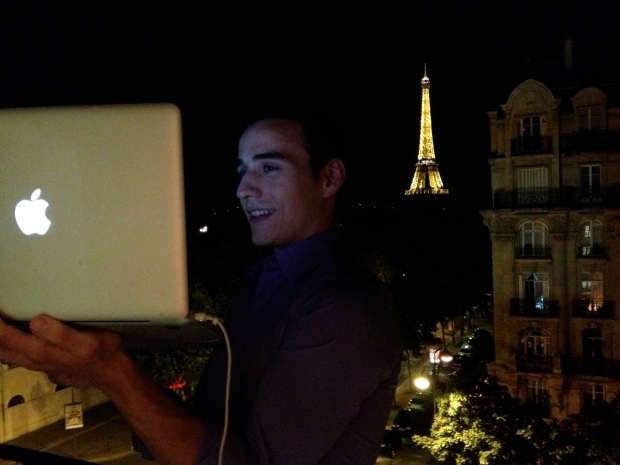 We Skyped the kids right at midnight to show them the Tower’s light show, which happens for 5 minutes at the top of every hour. The tower goes from being floodlit to sparkling with millions of little lights. Jacob’s explanation: “The Eiffel Tower is Sprinkling!” 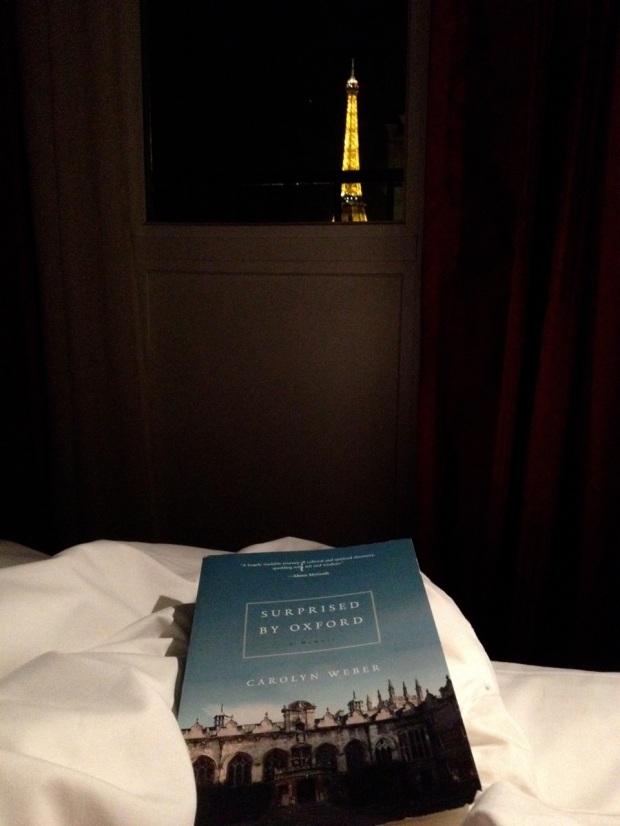 I don’t always read in bed, but when I do I can see the Eiffel Tower with my head on my pillow. 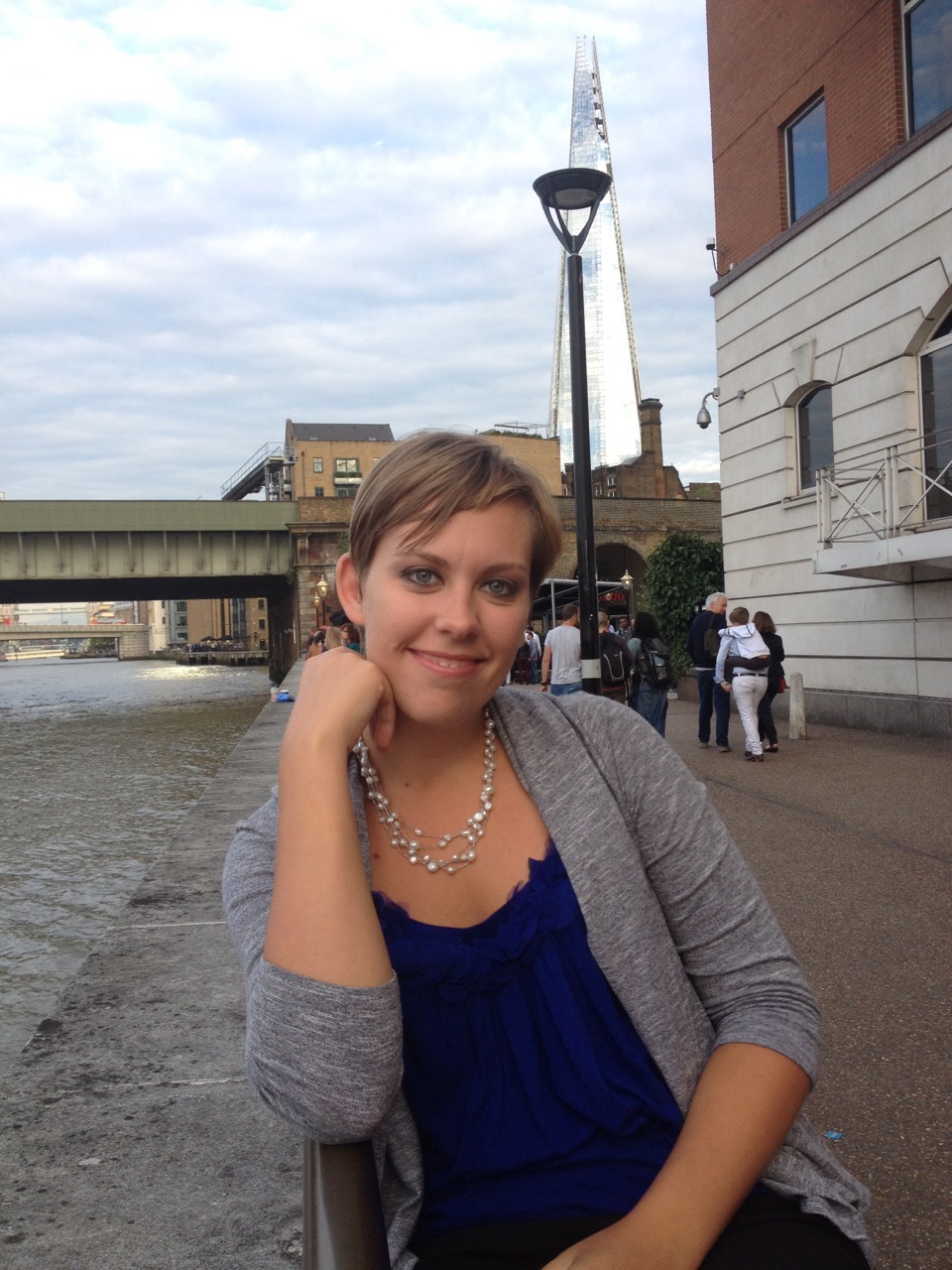